Students took part in the Academy training programme at CPH:DOX

When a student enters the professional film business, it is a good idea to try and understand this ever-changing industry with its specific rituals and notions on what makes a good film and what does not. This is important for students to navigate the environment and succeed in it, but there is more to it: it is also important for them to be able to critically reflect on the environment that helps shape their own work and to find their own free space within it. Perhaps so that they can transform the environment one day. They need to understand who and how influences the form of the films that are considered successful and relevant: Who are the gatekeepers holding the keys to the “glamour world” of renowned festivals, co-production markets and countless selection processes, pitching forums, work-in-progress workshops and training programmes, without which most films face difficulties reaching broader international audiences and financing? How do these professional decisionmakers communicate with authors and producers on what a (documentary) film needs to be like to succeed on an international scene, and what are their convictions based on? What spawns the “new trends” that go on to shape entire fields of documentary cinema?

We are seeking the answers to these questions through an ethnographic research that we have been conducting for almost three years now in cooperation with Copenhagen’s CPH:DOX progressive film festival and the head of its industry programme, CPH:Forum, Tereza Šimíková who used to study documentary film at FAMU years ago.

Following two Covid-19 years of confinement to the online environment, we were able this year to finally come to Copenhagen with four students of the Department of Documentary Film (KDT) to visit the innovative film festival and one of the most important documentary film events of the year. Each student chose one project in development from this year’s CPH:Forum catalogue based on their interests. They then watched the projects from the preparatory stage to the actual pitching at the Forum including the reactions that they elicit in the selected decision makers to the final online interview with the filmmakers, during which they will find out three months later whether the pitching at the CPH:Forum actually helped the authors to find co-producers and raise the funds needed for completing the film.

For more details on the trip to Copenhagen, I will now give the floor to the students who took part in this year’s module. I hope there will be an opportunity to offer this trip to students in the years to come as well.

CPH:DOX gave me an “crash course” on how the current European docu-industry works behind the scenes. A great opportunity to see pitching sessions at the Forum co-production market. The presentations covered films from all over the world and we were even given a glimpse of the dramaturgic “backstage” of the Forum. What I appreciate the most is the close contact with both the Forum and one of the projects that I followed later on through one-to-one meetings with potential co-producers and sales agents. I may never have an opportunity to just be such an observer again. In the meantime, we visited the Academy programme as a group of students, watching films, discussing them and, most importantly, discussing the films truly in-depth with their directors. This was quite different from standard Q&A sessions after some screenings... And if you want to know what to watch our for, go for Riotsville or The Balcony Movie. Going to CPH:DOX in person is even better, though.

“When the white man came, he brought a bible and we had land. The white man told us to close our eyes and pray. When we opened our eyes, we were holding the bible in our hands and the white man had our land.” This is the story of a black Jesus who is coming to Congo in 1921 as a planter, claiming: “The Black will be White and the White will be Black.” Prophets Kimpa Vita and Simon Kimbangu and director Renzo Martens presented the docu-fiction project in development, The Gospel According to Matthew. Martens, a Dutchman, is tackling the issue of colonialism in an original and humorous way. The actual citizens whose land was stolen a hundred years ago will film the story of the black Jesus in order to buy the land back with their royalties. Martens will film the non-fiction part about the production. “Who will be crucified eventually?” the director asks at the end of his punchy pitch, addressing the members of all sorts of film institutions that could support the film financially. “Who will be willing to step up to the cross; who of you will pay for the land?” The room is abuzz with slight discomfort and I think I can even see some men breaking out their chequebooks and rolls of banknotes, ready to compete in climbing the notional Golgotha. This is what fundraising for making films may look like, and the realisation is hugely liberating. Not only can you see that even filmmakers on such a global level can be nervous and even stammer now and then – in addition, there is room for hyperbole and wit that can make even the most cynical money owners gentle. I came back to Prague motivated to survive the next pitch audit at our Department with a sense of perspective that I would likely not have a chance to get without this experience.

As I was exercising my long-forgotten muscles riding a bike – because I consider not riding a bike in Copenhagen inappropriate – I had eastern disco pounding my eardrums on my way to the festival centre in order to at least feel a little bit inappropriate. Passing the faces of all the cyclers and pedestrians, I pondered their beauty and also the fact that they all looked like in Another Round. Copenhagen is like this weird kind of Brno with pretty people. I feel like every film I saw was good and every director who met us students in the Academy programme told us something inspiring. By the way, the Academy concept is something that any festival should steal. I believe that getting a glimpse of those unknown worlds (in this case, the opportunity to take part in a research programme abroad and mentoring programmes run by international authors) is one of the highest values that our school lets us benefit from. After all, in my own work, I consider it important to seek inspiration and confront it with the world instead of shutting myself away from it.

The trip to CPH:DOX was extremely intensive and interesting for me. The five days that we spent in Copenhagen together passed by very quickly. The city is beautiful and notable for its cycling; I also cycled relocating between screenings and discussions. Most importantly, we had an opportunity to get a glimpse of the CPH:FORUM with presentations on films in development. Each of us (FAMU students) chose one film project and followed it all the way from the preparation to pitching to one-to-one meetings where producers were discussing the financing of the projects in privacy. I rate this as truly great experience and I recommend experiencing this to everyone who wants to see how the film market works. Our accreditation also included the :ACADEMY, meaning that we were put in classes focusing on the field based on our film project choice. My class was :SCIENCE, yet it readily crossed the borders to the social and political realms and hybrid forms of documentary film. We spent our afternoons to evenings watching the festival films and, the next morning, discussed them with their directors in classrooms or cinemas. All the students prepared relevant questions for the discussion, so the debate was always highly inspiring. In the field of science, the most prominent films that the festival chose are Fire of Love (dir. Sara Dosa), Into the Ice (dir. Lars Ostenfeld) and The Invisible Extinction (dir. Steven Lawrence, Sarah Schenck). Of course, the festival kept up with the current developments, pointing out the climate crisis and the war in Ukraine. Navalny (dir. Daniel Roher), the last film that I got to see at the festival, made a huge impact on me. It opened up many issues and conflicts within me. I was even unable to stop thinking about it on my way home, since the situation at the airport with a one-hour delay was reminiscent of Navalny’s problematic arrival in Moscow.

All I can do now is give my “stamp of approval” on everything that my schoolmates wrote. Both the direct involvement in Lucie Králová’s research into the inner workings of institutional influence on projects in development and the Academy concept for the students of film and fine art schools were extremely enriching, intensive, and eye-opening. Add to this the cycling trips round the picturesque Copenhagen, to the seaside and to Christiania, the incredible vegan meals at student-friendly prices directly in the heart of the festival (I will never forget their dreamy salty millet porridge), the super-interesting and helpful Tereza Šimíková, Head of CPH:Forum, the opportunity to watch Irani director Mehrdad Oskouei raising the funds for his project, and the conversation with Sara Rüster of the Swedish Film Institute who happens to be the aunt of my childhood pals (which we found out together). And then there were the nightly rides from parties through frigid Copenhagen, a karaoke session in the cinema, a bottle of wine costing CZK 800, and water packaged in cartons like milk. In a word, splendid! I would come back without a second thought, and I wish for my schoolmates to be given an opportunity such as this. My rating: 10/10. 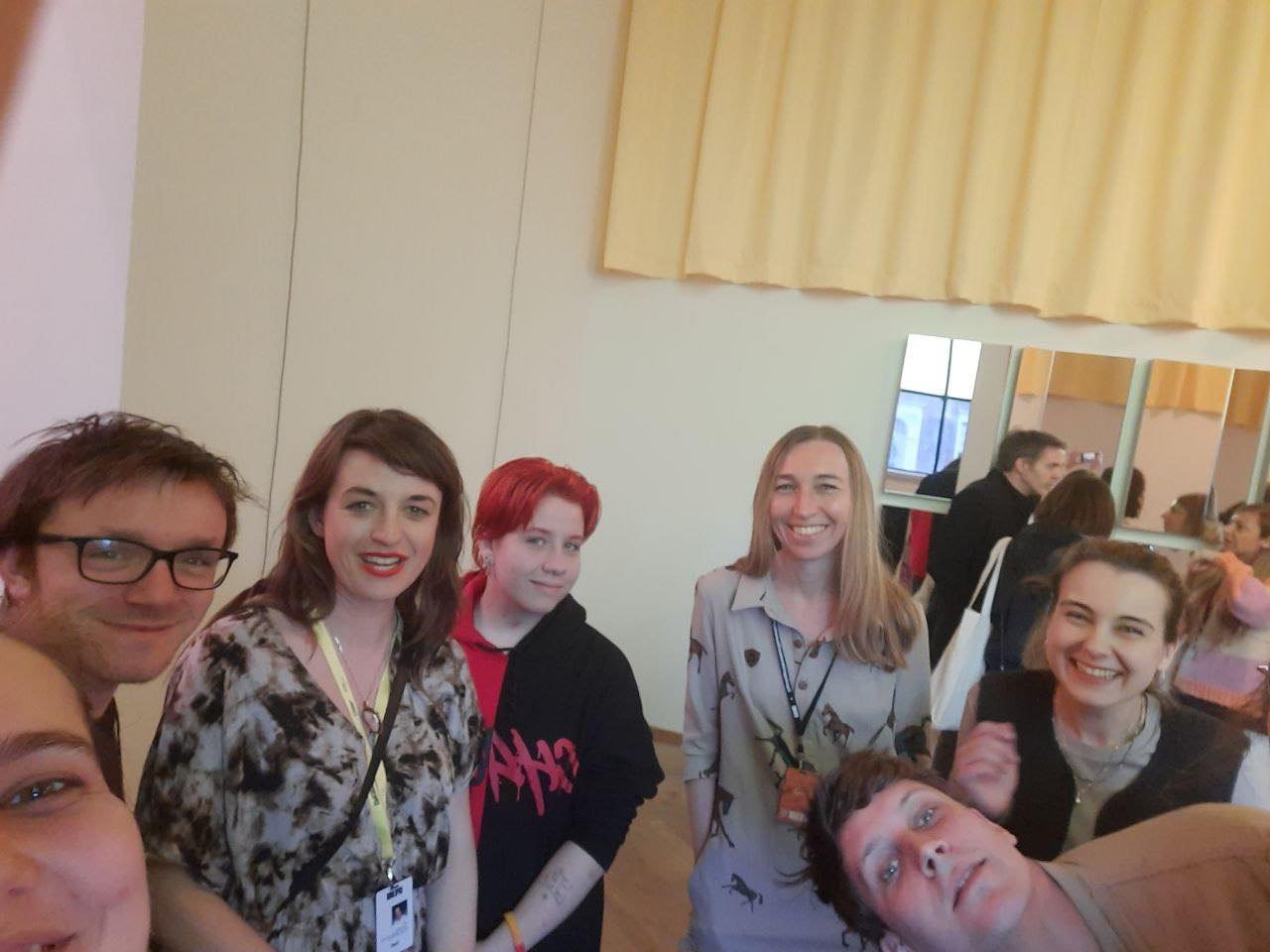