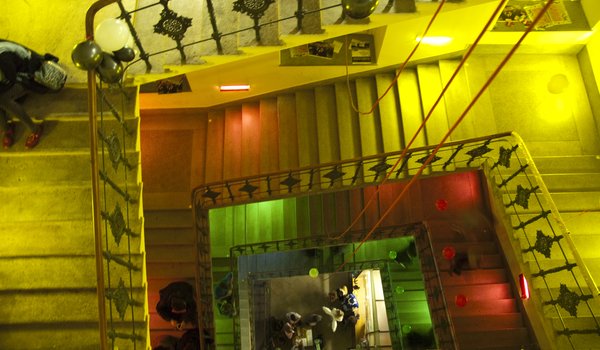 If you have completed a Bachelor’s Degree in film or a related field, have a wealth of experience in film composing and wish to expand your knowledge and skills, enroll for Montage, a 3-year follow-up Master’s Program at FAMU.

The goal of the Montage Master’s program:

You will master montage as a natural way of your artistic expression and you will stand side by side with the director as his creative partner.
You will have the expert ability and skills to solve various issues in composing sound and image. You will be able to approach the editing of an audiovisual work in a comprehensive manner, respecting and developing the director’s vision and the nature of the work in progress in a creative manner while using contemporary art and technology trends. You will get film editing into your blood, the montage will become your way of thinking.

Consistent work under a mentor’s leadership

The core of the program is intensive work in workshops always led by active professional film editors, capable of conveying their current working experience and a theoretical view of film editing to students. There is never more than six students in each workshop, which allows for providing an individualized approach to each of the students.

The program covers all types of audiovisual creation (film, TV, new media). Aside from Avid, DaVinci and ProTools software, you will get an opportunity to work with the physical analog film on a Steenbeck flatbed editor for both 16mm and 35mm films. FAMU provides the amenities of a comprehensively equipped film studio (Studio FAMU – the official production house of FAMU) and two high-end screening rooms with both analog projectors and a 4K projector for both post-production and teaching screenings.

Your graduate project can take two forms. One is participating in the final short film made by your schoolmates in the other Master’s international programs – being the editor for a new film. The other option is editing independently the raw footage of an existing feature film, resulting in your own original interpretation and meaning. Either of the two challenges will give you unique experience.

By enrolling at FAMU you will tap the growing environment of international study programs with access to an entire ecosystem of optional courses outside the range offered by the Monatge track. You will encounter, mutually inspire and work with colleagues from around the world studying international programs of as well as Czech students from other FAMU programs of Directing and Documentary filmmaking

You will love the vibrant and family-like atmosphere of the entire school as well as living in Prague. The Czech Republic and its capital are a charming and inspiring place to live and create, and its position in the heart of Europe has always made it a place full of energy where various cultures and ideas would encounter each other.

The Montage workshop will accompany you throughout all six semesters of your journey towards obtaining the skills of a professional film editor. The workshop is a space dedicated to intensive collaboration between the mentor and students. In the workshop, you will address the principal issues of the art of editing: narrating through the editing composition, combining sound with image, mastering the differences between a documentary and a fiction film in terms of methods, and many other tasks. In the last year, you will be able to consult your mentor regarding your final project.

This unique course focuses on the actual film stock and you will receive rare hands-on experience with this type of work. Based on a detailed storyboard, you will shoot a brief sketch using a 16mm camera and including the soundtrack, and than on the flatbed you will transform this footage into a film story. Doing so, you will use the basic editing methods (parallel montage, cross editing, work porgress, line of an action rule etc.).

Examples of the leading works in film history with a detailed explanation will show you how a story is told by film. The course will show you how a particular plot can be processed with film narration in various genres, periods and cinema traditions. You will consider the principal building blocks of a (good) story and the ways to transfer it to a film screen.

Grammar of the Film Language

You will learn to efficiently use the principal elements of the film ‘language’ – when, how and for what purpose these elements are used. To conclude the course, you will get your own assignment – you will be asked to develop the way to ‘articulate’ a specific scene in the screenplay in the film language.

The course uses the film theory as a tool to better understand the various methods of film narration and ways of thinking about film. Armed with the semiotic theory, you will be able to analyze film structure and its components, think about film composition as a whole, and understand how both past and current film greats use the film language.

The editing workshop is the crucial place where each film character is created. The editor is (co)responsible for the final presentation of a character on the screen. In the course, you will study the human psyche, behavior, and a nature of decision-making. In the final hands-on exercise, you will work as the director to gain a practical understanding of his part of the creative process of building of a character and the importance of the cooperation between the actor, the director and the editor in interpreting a character.

This course goes to the roots of the civilization, revisiting the oldest narrations of religions and cultures and showing how the relatively young film art form reflects thousands of years old stories on eternal topics (the Good, the Evil, Paradise, Death, Revenge, Hero, Anti-hero, God…).

This hands-on exercise is focused on editing skills. Your task will be to process various scenes from the raw footage. The exercise includes lecturing and discussions. As a result, you will master editing as a discipline that has two sides to it – being a craft as well a unique art form. Aside from technical aspects, editing also has aesthetic qualities that play a key role in creating and finalizing a film.

In this course you will get to prove your editing skills in practice as a member of a crew of schoolmates backed by FAMU Studio. At the end of your work, there will be a completed film and a wealth of experience with the process of creating a film while cooperating with the director and the other members of the film crew.

You will take part in a workshop or a seminar outside the FAMU environment at least one or two times. You will get an opportunity to work under the leadership of internationally acclaimed tutors during festivals, seminars and masterclasses. We usually collaborate with the following festivals and workshops: ExOriente, IFF Jihlava, PAF Olomouc, MidPoint, and Dok.Incubator, European Editing Masterclass...

Consulting and a Second Opinion

Consultations will offer you a different view of your work. You will improve and progress with the feedback from experienced tutors, lecturers and film professionals who will lead you with the help of their hands-on artistic experience and teaching abilities.