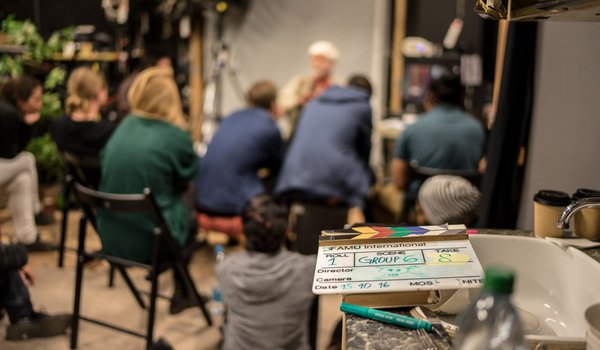 Established in 2008, Cinema and Digital Media-Directing is a three-year follow-up Master's programs for graduate students who already received a BA degree in Cinema or another field.

The students are selected for the program based on the evaluation of their talents and necessary skills level. The intentionally low number of students guarantees a personalized approach to every single student.

The program is built on the system of mentor-led workshops providing small groups of students (six or less) an intensive hands-on guidance on how to transform a creative idea into a  fully realized short film.

Tuition includes at least one short film production in every semester (year one and two) and final film (year three), using both digital (HDV, HDSLR and other) and analog (16 and 35 mm) technology, on location and in the school‘s own studio.

Alongside with that, students receive a number of compulsory and elective courses providing them with the necessary theoretical and practical tools associated with the work of the professional filmmaker.

Teachers and mentors in the program include full-time faculty from the eleven degree-granting departments of FAMU, as well as other artists, academics and film professionals as part-time faculty.

The program is completed with Thesis, First Draft of Long Feature Screenplay, Final Exam from Film History and Theory and Final film.

Upon the successful completion of the program students receive an internationaly recognized MFA degree.

Maximum number of applicants accepted into the program for the next academic year: 9