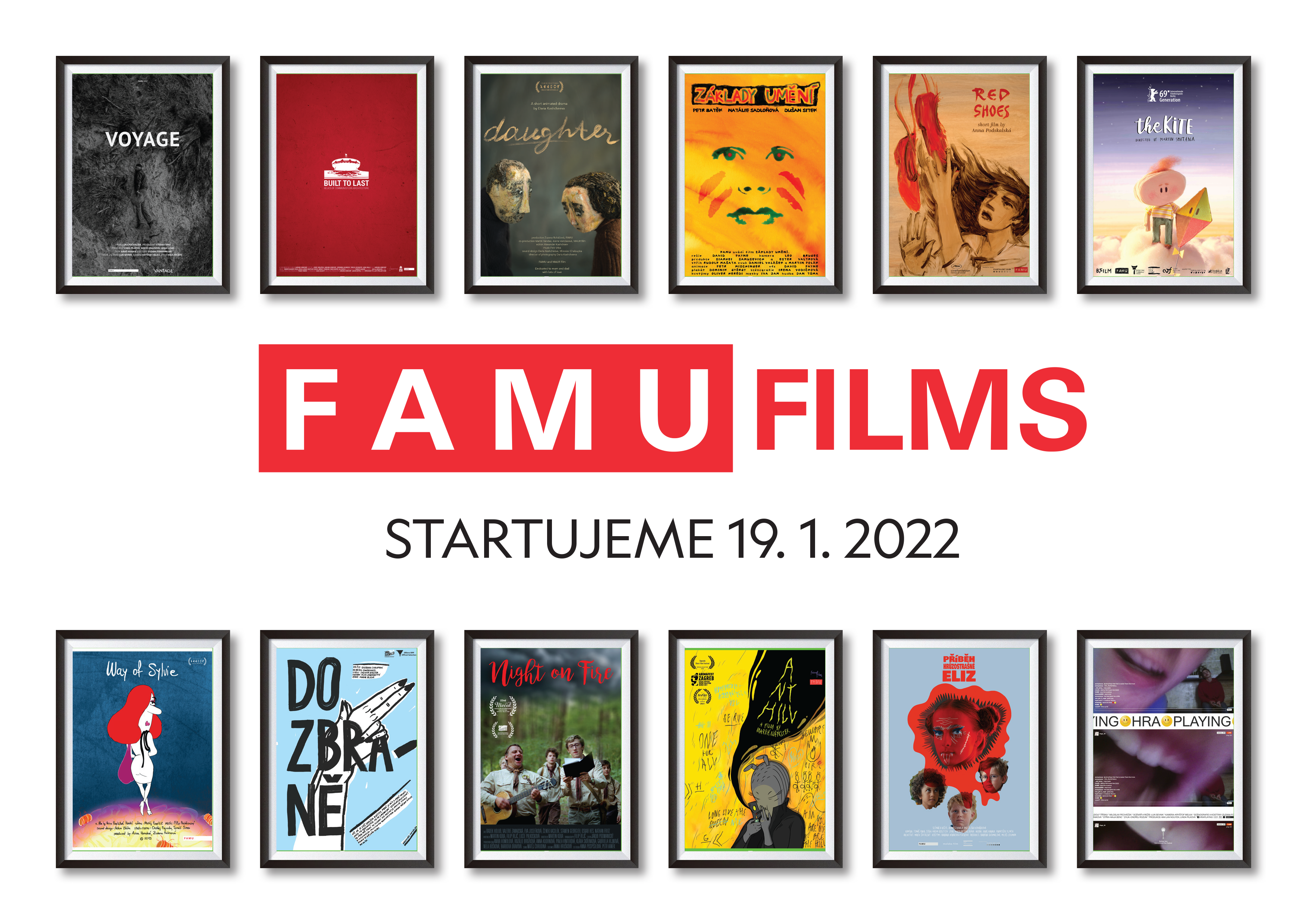 Prague’s FAMU is the first film school in Europe to launch its own VOD platform, FAMU Films, which offers public access to films made by its graduates and students from its inception to the present. The platform was launched on the occasion of the 75th anniversary of the school’s foundation. Available at www.famufilms.cz, this ‘one-stop shop’ with the highest quality content gives viewers an opportunity to see FAMU students’ and graduates’ films from authors such as Věra Chytilová, Jan Němec, Jan Svěrák, Jan Hřebejk, Helena Třeštíková and Jan Prušinovský. FAMU Films also offers the latest films, including the Student Academy Award-winning Daughter, as well as Red Shoes (shown in Cannes) and The Glory of the Terrible Eliz, both currently nominated for the Czech Film Critics’ Awards and the Czech Lion awards. A FAMU Films trailer is available at https://youtu.be/UQApFVP4pcg.

“While often appreciated internationally, films made by FAMU students can sometimes face difficulties in reaching domestic viewers. FAMU Films offers filmmakers the option of presenting themselves and their output to the general public, teachers and applicants for study. Over time, we will be adding films made by all students and profile FAMU Films as another distribution channel,” explains Alexandra Hroncová, Head of FAMU’s distribution section and the author of the platform concept, co-created by students from several FAMU Departments. FAMU is one of the leading institutions in the Czech audiovisual community and its films are among those most often presented and appreciated at international festivals, making it the Czech Republic’s most successful film producer statistically. Ever since its beginning, FAMU has been open to international students; globally renowned film directors such as Agniezska Holland and Emir Kusturica are among its alumni. Three of its Czech graduates, Miloš Forman, Jiří Menzel and Jan Svěrák, won an Academy Award. The development of online distribution, digitalisation and access to older films, including ones made in the 1960s and 1970s, is a logical trend in the development of the film school, now in the 75th year of its existence.

FAMU Films presents student films across the range of genres from feature films to documentaries and animated films to experimental output, as well as offering videos summarising the principles of study that feature Petr Jarchovský, a teacher of the Department of Scriptwriting and Dramaturgy and Bohdan Sláma, the Head of the Department of Directing. The web portal currently offers more than 200 films, including works by the members of the Sklep Theatre – Tomáš Vorel, Ondřej Trojan and Milan Šteindler, early films by Věra Chytilová and Drahomíra Vihanová, and also the works of Karel Vachek, Karel Kachyňa, Filip Renč, Juraj Jakubisko, Jiří Menzel, Dušan Klein and Vojtěch Jasný. Films made by international graduates are represented as well, including the most current generation of filmmakers such as Olmo Omerzu, Jakub Jirásek, Terézia Halamová, Kateř Tureček, David Semler, Nora Štrbová, Kateřina Karhánková, Eliška Cílková and Adam Martinec. Some of the films, such as student works by Helena Třeštíková, are offered for viewing for the first time ever. The films available for viewing will include Still Awake? by David Payne and Postup práce by Lun Sevnik, currently nominated for the Magnesia Award for the best student film as part of the Czech Lion Awards. This year, FAMU Films will also offer themed film collections, for example to mark the anniversaries of leading personalities and curated selections courtesy of the domestic film industry luminaries. At this point, the web portal is accessible only to viewers in the Czech Republic, offering Czech content and an option of displaying English subtitles; an English version will be launched in the future. Subscription fees are either CZK 80 per month or CZK 800 per year and cover the cost of digitalisation, licences to the published films and other costs associated with copyright.

There is an opportunity for the public to support the existence and development of a unique European VOD portal focused on student cinema by donations; donors will become members of the I Love FAMU Films club. Membership can include free subscription, free tickets to FAMU Fest or FAMU screenings in cinemas, and other benefits.

“FAMU Films is part of the school’s strategy of openness towards the cultural community and society at large. It allows us to show the works of our talented students to the general public, in turn giving the students broader and different reflections on their work,” says Dean of FAMU Andrea Slováková.

FAMU has currently 12 Departments, the newest being the Department of Game Design that first opened in this academic year, whose output will also be presented through FAMU Films. The current Dean is Andrea Slováková, the twenty-first Dean of the school and the first ever female head of the School. Her main priorities include facilitating connections between the students and current global cinema. As part of the effort, a mentoring programme running since the summer of 2020 has brought award-winning celebrities of global cinema to the School: directors Albert Serra (The Death of Louis XIV, Honor de Cavalleria), Carlos Reygadas (Our Time, Post Tenebras Lux), Yorgos Lanthimos (The Lobster, The Favourite), Pedro Costa (Vitalina Varela, Colossal Youth) and Béla Tarr (The Turin Horse, The Man from London), and cinematographer Rodrigo Prieto (The Wolf of Wall Street, Brokeback Mountain).

The Film and TV School of the Academy of Performing Arts in Prague (FAMU) was founded on 28 November 1946 and is one of the three Faculties of the Academy of Performing Arts alongside DAMU and HAMU. Currently, 435 Czech and 94 international students study at FAMU. In the 75 years of its existence, the school has educated thousands of students from more than 70 countries all over the world. The FAMU Films web portal was created with the support from the Ministry of Culture of the Czech Republic.