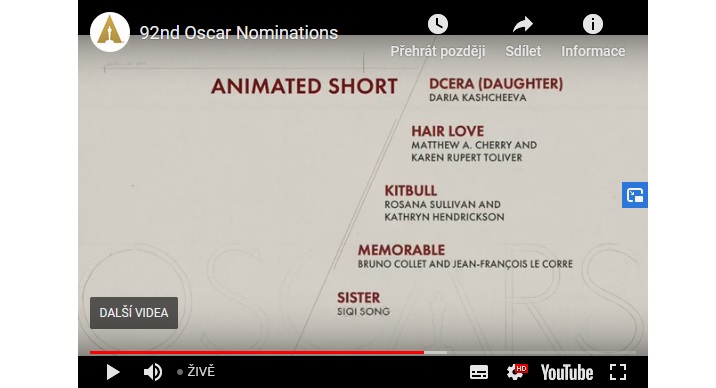 The American Academy of Motion Picture Arts and Sciences has announced the nominations in all 24 competition categories, from which the winners will be announced on 9th February at the awards ceremony in the Dolby Theatre in Los Angeles. The animated puppet drama Daughter by Daria Kashcheeva, student of the Department of Animated Film at FAMU, which was co-produced with MAUR film, was selected as one of the last five finalists in the Best Animated Short Film category. Daughter is thus the only Czech animated film that has in recent decades managed to compete for an Oscar.

The director has already won many awards, the most prestigious being the Student Oscar for the best foreign animated film, which was awarded to her last September by the American Academy of Motion Picture Arts and Sciences. Her film also won in the world-wide competition of 1615 best film-school movies. Its world premiere took place in the biggest festival of animated film in the world, in French Annecy, where it was awarded the highest award, Le Cristal d'Annecy, for best student film. Since its premiere Daughter has entered more than 80 festivals all over the world, including major festivals in Toronto, Melbourne, Sundance, and has managed to collect 40 winner prizes! Since mid December when Daughter got on the shortlist for the Oscars, from which today the finalists have been picked, dozens of other festivals have shown an interest. It is already clear that Daughter will be shown at more than a hundred festivals all over the world.